Some versions of gnu make for windows can encounter an exception when you try to run a make file with them:

I encountered this issue, and eventually stumbled upon a stack overflow question, the top answer of which recommended explicitly passing SHELL variable. This did indeed fix the problem for me:

When running make, pass in this SHELL variable:

Either along with the command line arguments, or just add it to the top of the make file.

This solution works, but doesn’t fix the actual problem: why is make unable to find the shell?

In the comments of the stack overflow post some people mentioned that the problem might stem from the system PATH. I ended up switching to a newer version of make (4.1) which, while it did not fix the problem, handled the exception more gracefully and sheds some light on what is actually happening:

It displays an error that states sh: C:\Program: No such file or directory.

Basically each instance of “Program Files” on the PATH contains a space that isn’t escaped properly (as far as make is concerned). It is not the length of the PATH, but the spaces that are causing this issue.

Not surprisingly, the top of my PATH looks like this: 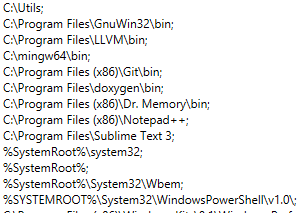 (For anyone curious, I’m using the free Environment Variable Editor to make managing my PATH much more painless)

While I could move %SystemRoot%\system32 to appear before an instance of program files, I already deliberately have it lower so that I can use a newer version of Git, which is in program files.

A Better solution is to change the PATH to no longer include spaces. A clever solution also recommended on stack overflow was to use macros instead:

These macros ultimately evaluate to the same thing and your path remains unchanged, but now it no longer contains any spaces. 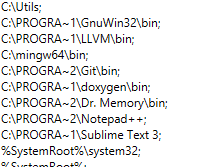 This way I am able to maintain the order of my path, and don’t have to add an additional step every time I want to build a make file.

Some people may not have a lot of things on their path, in which case the you just move system32 to the top.

However if you can’t easily do that, I hope these two solutions work for you.