Note: This post is reference for a class. It is assumed that you have a basic grasp of Linux commands such as apt-get and linux file permissions.

Here is a small collections of tips and tricks with the intention to help improve usability and general productivity when ssh-ing into a linux machine. It was written with Ubuntu/Debian in mind, but should also work on other linux versions such as Mint.

For the most part these are all fairly straightforward and this post will probably contain nothing new for anyone that has a fair amount of linux experience.

1. Use history and grep

You may want to look up some commands you ran a while back (for example if you want to repeat the same steps on another server or VM).

If you type history you will get a list of all commands you’ve typed recenctly, including past sessions.

You can pipe that output into the grep command to filter out all the commands that had a specific string. So for example if you want to find every command you’ve ever run containing “test”, you can do history | grep "test":

Note that each user has their own history, so if you use a command with sudo, such as sudo apt-get install ... the command will only show up in the root user’s history.

Running sudo history may result in a sudo: history: command not found error. To get around this you’ll need to elevate yourself to be the root user first:

2. Use the command line faster

Use tab to autocomplete

When you are navigating a complex folder structur, you should always press tab after typing the start of the path you want to travel.

For example, if you want to navigate to:

You can do so easily by typing cd ~/R tab V tab A tab:

Assuming that at each level the name of the directory is unique. Each time you hit path, the console would attempt to auto-complete as much of the path as possible.

If you had both ~/ReallyReally and ~/ReallySorta then typing ~/R tab would autocomplete to where the two names differ, at which point typing either R tab or S tab would complete that directory name. When it stops you can hit tab again to see all possible options.

This is different from the behavior of the Windows commandline, which auto-completes the first option, and each tab cycles to the next option.

The !! macro is replaced by your last command, allowing you to quickly re-run commands with sudo:

Similarly you can grab only the arguments to the last command with !$, so you could use that to re-run just a command that followed sudo.

Lastly, if you ever want to grab a specific argument from the last command, you can use !!:n to grab the n’th argument:

Use Ctrl+R to quickly run past commands

As in the windows commandline, you can press the up and down buttons to navigate your most recently run commands.

However if you type Ctrl+R you can get an auto-completing reverse-i-search. Simply start typing and the best matching command will fill in, then press enter when you have selected the right command.

Repeatedly hitting Ctrl+R will cycle through all commands that might match, even with fuzzy searching:

3. Use nano for config files

nano is probably the easiest linux text editor to get into, and ideal for small config changes. It’s what I’ll be using in the rest of this tutorial, and there are some small changes you can make to make it more usable.

While learning more full-featured editors such as vi is encouraged if you plan to do serious development on linux servers, nano is really easy to get a hang of.

IMPORTANT: Ctrl+Z will minimize an open document without actually closing it. This is an easy mistake to make when first starting to use nano. To bring it back to the foreground use the command fg

(Remember, you can use Ctrl+W to search for them)

Use htop to view running processes

htop is a fantastic interactive process and system resource viewer. You can view all currently running processes, as well as system Memory Usage, CPU usage, Load Average and system uptime.

Simply install it with:

And run it by typing htop, and close it with F10 or the standard Ctrl+C. 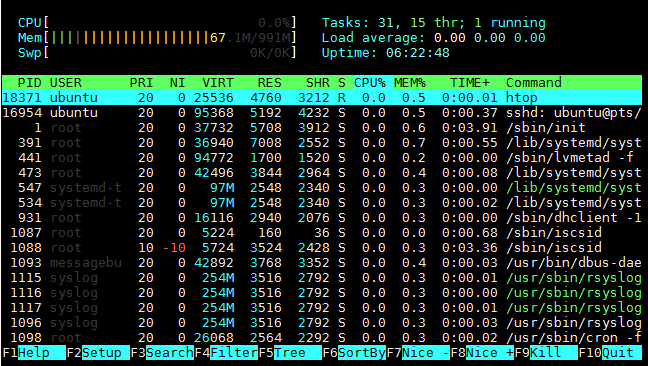 Note: Certain processes will only be visible to root, and can only be killed by root, so when necessary run sudo htop instead.

Use supervisorctl to easily daemonize anything

If you ever want to daemonize a script or application so that it runs without supervision, this can be a pain without specialized applications such as pm2 for node.js applications.

Enter supervisor, a powerful solution for managing and running processes without having to resort to writing startup scripts or using screen.

It is far too large to cover here, but it’s so painless and useful compared to really any alternative that it’s worth mentioning. I personally use it for running several game servers that don’t provide straightforward daemonization.

Here is a good tutorial to get you started if you want to use it: https://www.digitalocean.com/community/tutorials/how-to-install-and-manage-supervisor-on-ubuntu-and-debian-vps

Note: for node.js applications PM2 should be used instead

We’ve all been here:

AGH!! Yes just do it as root already, you know what I meant!

While you could use the !! macro to simply re-run the command, you can instead install TheFuck to automatically fix your command, and vent some frustration at the same time:

It will intelligently try to auto-complete the most recent command you typed. It works for a ton of other commands as well.

It is a python script that you can install via pip like this:

And then you will need to edit the .bashrc startup file located in your user’s home directory:

Navigate to the bottom and add the following:

And then re-load the startup file, either by disconnecting and reconnecting, or by running

Speaking of .bashrc, it is a startup script located in a user’s home directory that is run when they log in. It sets up settings, such as what the part of their console to the left of the $ looks like.

Any change you make to a .bashrc file will only take effect when it is reloaded, either by relogging or typing source path/to/file.

NOTE: each user has their own .bashrc file. For example root’s is located in /root/.bashrc instead of /home/<username>/.bashrc. It is what is loaded when you switch to root via sudo su

You can define custom command aliases easily with the format:

For example, if you are used to using dir in the windows commandline and can’t stop accidentally typing that instead of ls -la, you can add this alias:

If you plan on installing custom commands and want to make sure they appear in your path, .bashrc is where you do so.

Let’s say you want to add /home/username/testing to your path. You would include the following line at the bottom of your .bashrc file (on linux the PATH variable is delimited with colon : characters))

Which would append your path to the end of the PATH variable.

If you want to replace something already on the path, you’ll want to prepend your path as follows:

To make sure that it is executed first before the path you are trying to replace.

As mentioned earlier, the history command is very useful for looking back at what you’ve previously done on a linux machine. The bashrc file defines two variables that determine how this data is stored:

While it is probably unlikely for you to run more than 1000 commands, it’s pretty easy to reach more than 2000 commands total if you frequently run commands on your server. Therefore it’s a good idea to increase the HISTFILESIZE to something larger like 50000. Since the only data that is stored is the command, not the resulting console output, the total size of the file will still be really small.

Adding some color to your console can greatly improve the experience of working in the console.

newer versions of debian/ubuntu will already add some color to their output, but otherwise this is done by modifying the PS1 variable, which is used to alter the appearance of the console string.

Then the PS1 variable should be set as follows (note that on most recent ubuntu and debian installations this is the default):

This will change your commandline from this:

Additionally, this can be used to make it easier to tell when you are using root, by showing them as a different color:

To do this, first follow the same steps as above with root’s .bashrc file with sudo nano /root/.bashrc. (remember to also increase its HISTFILESIZE if you haven’t yet).

Then once color is enabled, you can change the color from green to red by changing the first 32m in the PS1 variable to be 31m instead.

So for your root’s .bashrc the line would now be:

When working with git repositories it is really useful to be able to see when you are inside a git repository, and which branch has been checked out in your working copy, like this: 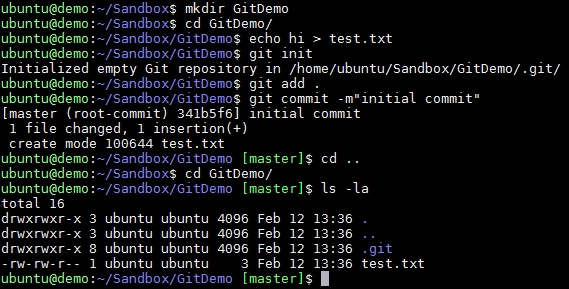 To do this you first need to include this function at the bottom of your .bashrc file, which will be used to grab the current branch string.

Note: You’ll once again want to apply that change to root’s .bashrc file as well, and make sure to change that first 32m to 31m to ensure its color remains red..