This blog is hosted on github pages using jekyll, a static website generator.

While there are several guides for installing jekyll for Windows (official github pages article, Run Jekyll on Windows) They seem to skip some key points that have given me trouble with the latest version of ruby (2.3.3 as of this writing) on Windows 10.

Having struggled through this twice now on two separate Windows installations, I’m making this guide so that at least I’ll be able to refer to it quickly. I hope it helps anyone else that has issues getting jekyll serve to just work as intended.

What This guide covers:

What this guide does NOT cover:

If you would like to learn how to make a new Github Pages Jekyll Project please see step 2 and 3 in the official github pages guide, or look into other tutorials. For example:

First we need to make sure that we have all dependencies for Jekyll on Windows 10. If you have Ruby, Ruby Development Kit and Bundler already installed and working, feel free to skip down to the 2. Get Jekyll Server Working section below.

The latest direct download link for 64 bit as of this writing is: rubyinstaller-2.3.3-x64.exe (located on the download page in the top RubyInstallers section).

During the installation make sure to have ruby added to the path, or do so manually by adding C:\Ruby23-x64\bin to your path. 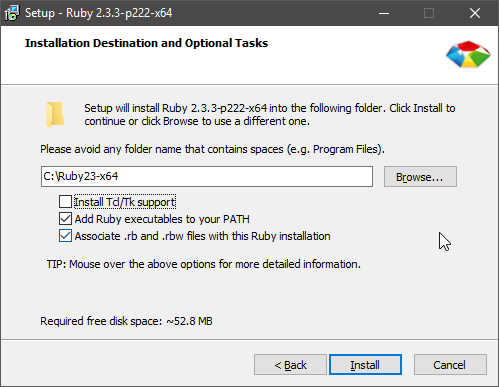 You can verify that your path has been modified correctly by opening a new command prompt and typing (a command prompt that was open previously will not yet have the new PATH): 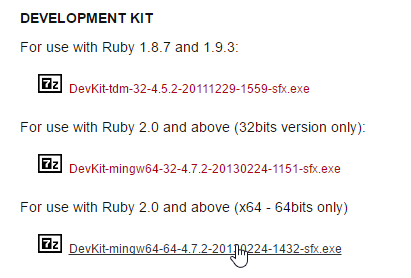 When you run the executable it will simply ask you for a directory to extract to. DO NOT EXCTRACT TO YOUR DOWNLOADS FOLDER, which will dump dozens of files. Instead provide a path next to the ruby installation such as C:\RubyDevKit.

You need to first initialize and then bind the devkit to your Ruby installation. Open a command prompt and navigate to the newly extracted folder:

Then to initialize the devkit run:

Finally install and bind the devkit to your ruby installation:

Install the Gems for a Github-pages project

As mentioned earlier, this guide assumes you have already created a github pages jekyll site that you’ve cloned on your windows machine and want to serve locally. Your project should contain a Gemfile that contains at least the following:

With a command prompt cd into the directory containing the Gemfile and use bundler to install the github-pages jekyll dependencies:

If at this point you get a compiler error related to a json gem, that means your Ruby Development Kit was not installed correctly.
Double check that they are both the latest version, both are 64 bit, and you ran the commands to init and install the dk.rb file

This is where most tutorials leave off and where the majority of my frustration in getting Jekyll to serve on Windows 10 started.

At this point, the offical guide claims that you should be able to just run:

And that should work.

However on two separate Windows 10 Instances I have had problems here. Here is what I had to do:

Apparently this is a long-standing Issue with Ruby on Windows. You can read more about it here: https://gist.github.com/fnichol/867550

It boils down to the OpenSSL library that Ruby uses not including SSL certificate authorities in a file so we will install it using an Environment Variable.

This file will need to be stored in a permanent location. Since we already have C:\RubyDevKit, I’d recommend creating a folder for it there, for example C:\RubyDevKit\SSLCert. Move cacert.pem to that folder.

Now we need to set up an environment variable named SSL_CERT_FILE. To do so with Eveditor, launch the program and click ‘System variables’ in the left sidebar and click the ‘Run as administrator’ button to restart the program with elevated priviledges.

Now click ‘New’ In the menu bar, then at the bottom enter SSL_CERT_FILE as the Name and the full path for the file for the Value, which in my case is C:\RubyDevKit\SSLCert\cacert.pem.

Make sure to click the Set button, and you’re good to go. Note that if you have an open command prompt it will need to be re-launched to load the new variable.

However keep your environment variable editor open, because there is one more thing you may need to set.

Now when you run jekyll serve you may see this error:

It should be noted that my project’s .git/config does have an ‘origin’ git remote pointing at my github.com repository, but for some reason that is not enough. While environment variables are fun, they are not portable, so I chose to modify my _config.yml file instead to define the repository variable.

Simply add a repository key with value <USERNAME>/<REPOSTIROY_NAME> on a new line anywhere in the _config.yml file, which in my case was:

When trying to run jekyll serve you may see one of these errors:

This can be due to having 2-factor authentication set up on github, or the credentials not stored otherwise. The easiest fix for this is to generate a unique Personal Access token through github’s website, and store that in the JEKYLL_GITHUB_TOKEN environment variable.

For Token description enter something so you know what it is being used by. I named mine JEKYLL_GITHUB_TOKEN_COMPUTERNAME.

When you click Generate Token, you will see the token at the top of the page (screenshot is of a dummy token of course):

Make sure to either leave that open or copy and paste it in a new notepad++ tab, since you will never be able to see it again once you navigate away from that page.

Open your favorite environment variable editor and create a new System Variable. for Name put JEKYLL_GITHUB_TOKEN and for Value paste in the new token.

Make sure that you did not accidentally copy any spaces to either side of the token! Make sure to hit Set to save the token, and re-open your command prompt so that it reloads the env vars.

Lastly, you may get a dependency error that states:

As of the time of this writing (January 2018), this will occur if you are using the github-pages gem on Windows, because v171 of the gem added the default theme jekyll-remote-theme as a dependency which in turn requires libcurl.

Hopefully future updates of this gem will remove the dependency, but for the time being you have two options:

For the time being I chose to do the latter, and so in my Gemfile I changed

And with that, jekyll serve should finally work as intended: